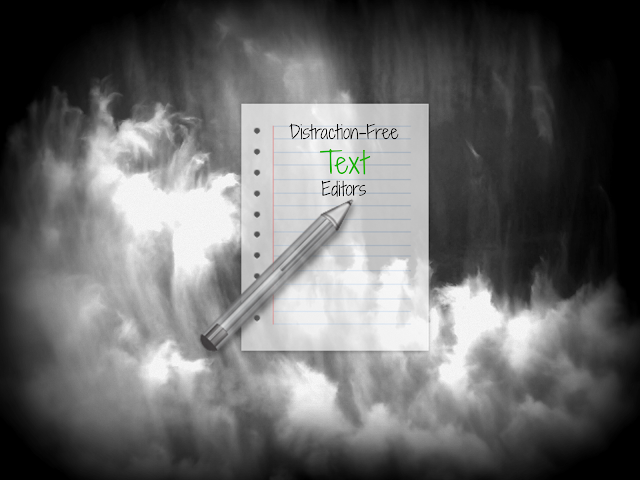 Have you ever heard of such word processors that promise to boost your productivity and creativity? Do you think it is possible to work more efficiently just by means of the software? Well, while some are seeking for writing tips on blogs and forums, we are going to make a brief review of distraction-free text editors and check whether they really boost productivity and help us concentrate on what we are doing. The list consists of different applications with different appeals, but we recommend you to try them, especially if you blog a lot.

Notepad++ is a free powerful and lightweight text editor on windows. This is probably the best available text editor free of cost. Most windows users prefer this over the Notepad and wordpad applications.

Sublime text is a cross platform feature rich text editor. It supports many plugins to enhance functionality and productivity. The editor supports many keyboard commands to extreme users of keyboard. The text editor is available on free to evaluate license (with no time limits).

Write! is a modern generation distraction-free text editor for writers and bloggers that aims to boost their productivity and make the work with text more efficient. Though Write! is on its stage of beta testing, it does not yield to other editors in its functionality and feature richness. Along with Write!’s minimalist design, you will be able to take the advantage of its spell-checker, markdown support, effective visual navigator, and many other interesting and useful features.
As for now the application works only on Windows machines, however in the future it will be compatible with Mac and Linux. If you love creating beautiful stories so that nothing disturbs you, this free text editor is just what you need. You can download the application for free and give it a try at the official web-site.

Ulysses III is a tool made for writers, journalists, students and all kind of people who write. It is compatible only with Mac and is not planning to broaden its horizons to other operating systems. Ulysses has a dark mode which can be helpful when writing in darkness hours, but not as useful in the daylight. As for the features, it supports markdown and markup to quickly format the text; with the application’s files library, all you documents can be neatly organized and easily accessed.
To be short, most of the people liked this application and the way it functions, however the thing that spurns from using it is the price which is $44.99 – not a small one. To have a deeper insight into the app, you may go to its official web-page.

OmmWriter is a cross-platform text writer that runs on Mac, Windows and iPad. The first thing that hit in the eye about this app is that you can change the background image of your working area, and also the music that accompanies you through the working process. OmmWriter is not as feature-rich as Write! and Ulysses III – among all the features it has only the markdown support. The developers of the application let you pay as much as you want based on what you have got out of it starting with $4.11 which is the least price.
According to what they say, the application was created for personal use, however the outcome was so good to hide it from public that the decided to share the app. Well, strange enough then to ask money for it. You can visit the product’s official page.

iAWriter is a distraction-free word processor for Mac, iPad and iPhone that is to some extent similar to the three previous apps, but with fewer editing instruments. The great advantage of this application is the ability to use iCloud and Dropbox to store your files and synchronize them among your devices. This is probably one of the things that make people use the app.
Its noise free writing interface induces you to write and create whenever and wherever you want. The price of this word processor is $4.99 for all devices. You can find more information about the app on their official web-site:

WriteMonkey is a portable and streamlined distraction-free text editor for Windows machines. You can access every feature via keyboard shortcut, thus you can create your masterpieces without even touching your mouse. WriteMonkey supports markup and markdown for easy in-text bolding, italicizing, and other formatting tools. There is also a “Segment Focus” – a feature that highlights only the passage you’re working on, great for writing and editing lengthy text. WriteMonkey also includes spell checking, auto-saving, document backups, and Firefox integration special add-on. You can have a closer look at the application here:

FocusWriter is as well a distraction-free and full-screen word processor with an emphasis on a clean writing space without sacrificing functionality. It is compatible with Windows, Mac and Linux. The user interface of the application is hidden at the edges of the screen, for example if you mouse up to the top of the screen, it will reveal a toolbar. Unlike many of other software, FocusWriter supports themes – you can use the four included themes or create your own combinations of background images, fonts, and other visual markers. It also includes a daily goal tracker that helps you control your productivity and efficiency. The price of the app varies from $0.00 to $20.00, depending on how much you want to pay for it. For more details go to gottcode.org/focuswriter/.

WriteRoom is a distraction-free text editor available for Mac OS X devices. It has a free cloud-base backup and synchronization. Every every element of the interface, such as toolbar and scroll bar, is automatically hidden when not in use. As well as in WriteMonkey, WhiteRoom features a novel “typewriter scroll” feature that keeps the active text in the center of the screen so you are always focused on the same spot—instead of following the text down the page. You can customize basic settings like the background and font color in the preferences menu. The price of the application is $9.99. Go to the app’s web-page to try it.

Draft is a browser-based service that is meant to revolutionize the way we collaborate on documents – it allows sharing and simultaneous editing. Draft supports markdown, notes, cloud synchronization and team collaboration. Apart from all these necessary features you can also take advantage of Hemingway mode that points to the fact that writing and editing are two very different functions – Draft will turn off your ability to delete anything in your document until you finish writing, and only then by using a special shortcut you can turn off this mode and edit the already written text. Go to website to find out more and try the app.

Byword is a simple and efficient text editing tool for Mac, iPhone and iPad. Byword is designed to make writing more enjoyable with Markdown syntax support. All the tools you need to write effectively, with keyboard shortcuts, word counters with live update, and more. It allows you to synchronize all your documents via iCloud and DropBox, moreover there is a feature that lets you publish to WordPress, Tumblr, Blogger, Scriptogram blogs and Evernote notebooks directly from the application. The price of the application depends on the king of the device: for Mac it is $9.99 and for iOS the price is $4.99. To know more about the app go to

SimpleNote is a text editor that is compatible with iOS, Android, Mac, and Kindle. Unlike all the previous software, it is more of a note-taker than a writing instrument. The app allows you to stay synchronized and updated across all your devices, find your notes instantly, and share lists, instructions and thoughts. One pretty neat feature is that SimpleNote allows you to go back in time – your notes are backed up when you change them, just drag the version slider to go back to the previous versions of your notes. The application is free to use, so you can download it at

Vim is free cross-platform text editor focused on programmers. It has been loved by unix native VI editor users for its simplicity and powerful features. Though its focused to be productive for programmers, you need not be a programmer for making best use of it for your regular editing experience. For several decades this editor was the best available editor on UNIX platforms.

ATOM is a text editor designed by github for programmers. It has extensive features for programmers to be productive and there are many plugin packages available to enhance the editor.

Brackets is a text editor for web developers and designer who work on HTML, CSS and Js. The live editing feature for HTML pages is really productive since the changes are immediately published to a browser preview without doing a save or refresh.

GNU Emacs is one of the most widely available free text editor that has existing for several decades. It is a old fashioned editor and preferred by people only for being available natively on all platforms. There are many users who still prefer to use it.

Having such a list at your disposal, you can now take an advantage of the distraction-free atmosphere and plunge into your work. Of course, if you are not willing to pay money for software, you can just try the ones that are free, but we thoroughly recommend you to try at least on of the apps, especially if you have not heard of such word processors before.