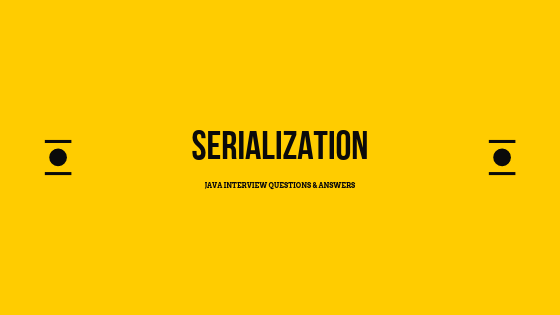 Any Java interview will have at least 2-3 questions on this topic and if a candidate is not familiar with the subject, he/she is bound to feel uncomfortable due to lack of experience. This post compiles a list of some most important Java Serialization questions which are worth having a look at before going for an interview.

Serialization is a mechanism by which you can save or transfer the state of an object by converting it to a byte stream. This can be done in Java by implementing the Serializable interface. Serializable is defined as a marker interface which needs to be implemented for transferring an object over a network or persistence of its state to a file. Since its a marker interface, it does not contain any methods. Implementation of this interface enables the conversion of an object into a byte stream and thus can be transferred. The object conversion is done by the JVM using its default serialization mechanism.

Why is Serialization required? What is the need to Serialize?

What is the Difference between Externalizable and Serializable Interfaces?

This is one of the top serialization questions that is asked in many big companies to test your in-depth understanding of serialization. Serializable is a marker interface, therefore, you are not forced to implement any methods, however, Externalizable contains two methods readExternal() and writeExternal() which must be implemented.

When will you use Serializable or Externalizable interface? and why?

Most of the times when you want to do a selective attribute serialization you can use Serializable interface with a transient modifier for variables not to be serialized. However, the use of the Externalizable interface can be really effective in cases when you have to serialize only some dynamically selected attributes of a large object.

Let’s take an example, Some times when you have a big Java object with hundreds of attributes and you want to serialize only a dozen dynamically selected attributes to keep the state of the object you should use Externalizable interface writeExternal method to selectively serialize the chosen attributes.

In case you have small objects and you know that most or all attributes are required to be serialized then you should be fine with using Serializable interface and use of transient variable as appropriate.

What is a Serial Version UID (serialVersionUID) and why should I use it? How to generate one?

The serialVersionUID represents your class version, and you should change it if the current version of your class is not backward compatible with its earlier versions. This is an extract from Java API Documentation

The serialization runtime associates with each serializable class a version number, called a serialVersionUID, which is used during deserialization to verify that the sender and receiver of a serialized object have loaded classes for that object that are compatible with respect to serialization.

Most of the times, we probably do not use serialization directly. In such cases, I would suggest generating a default serializable UID by clicking the quick fix option in eclipse.

What would happen if the SerialVersionUID of an object is not defined?

Declaring an explicit serialVersionUID field in your classes saves some CPU time only the first time the JVM process serializes a given Class. However the gain is not significant, In case when you have not declared the serialVersionUID its value is computed by JVM once and subsequently kept in a soft cache for future use.

What are the alternatives to Serialization? If Serialization is not used, is it possible to persist or transfer an object using any other approach?

In case, Serialization is not used, Java objects can be serialized in many ways, some of the popular methods are listed below:

What are transient variables? What role do they play in the Serialization process?

Why does serialization NOT save the value of static class attributes? Why static variables are not serialized?

The Java variables declared as static are not considered part of the state of an object since they are shared by all instances of that class. Saving static variables with each serialized object would have the following problems

How to Serialize a collection in java? How to serialize an ArrayList, Hashmap or HashSet object in Java?

In Java, if the superclass of a class is implementing the Serializable interface, it means that it is already serializable. Since an interface cannot be unimplemented, it is not possible to make a class non-serializable. However, the serialization of a new class can be avoided. For this, writeObject () and readObject() methods should be implemented in your class so that a Not Serializable Exception can be thrown by these methods. And, this can be done by customizing the Java Serialization process. Below the code that demonstrates it

What changes are compatible and incompatible to the mechanism of Java Serialization?

Some Simple Examples of incompatible changes are:

Java serialization is one of the most commonly misunderstood areas. Many developers still think it’s only used for saving objects on the file system.

Hope you found this list useful. Can you think of a question that is not part of this list? Please don’t forget to share it with me in the comments section and I will try to include it in the list.